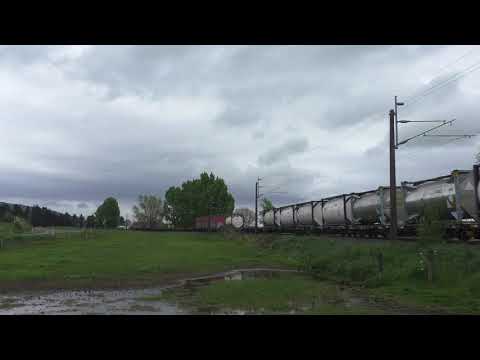 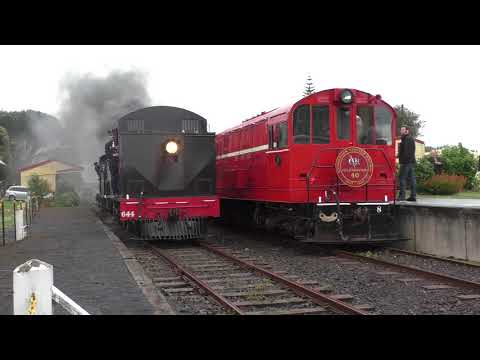 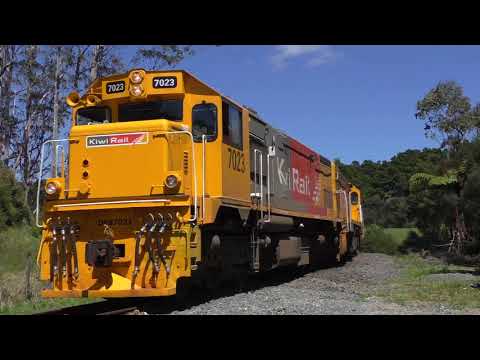 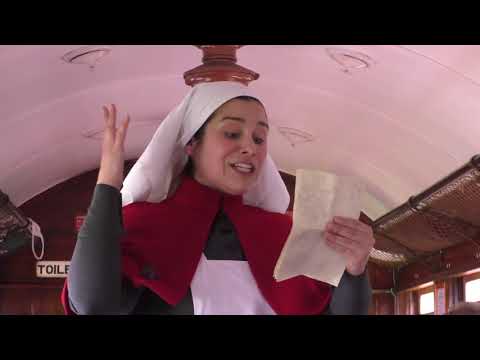 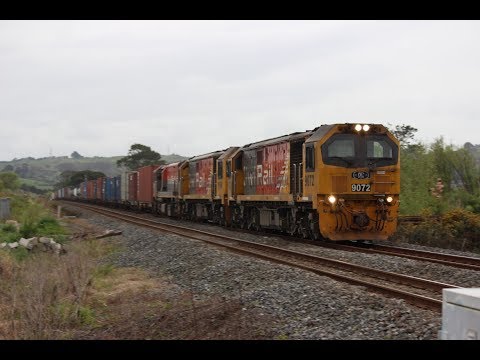 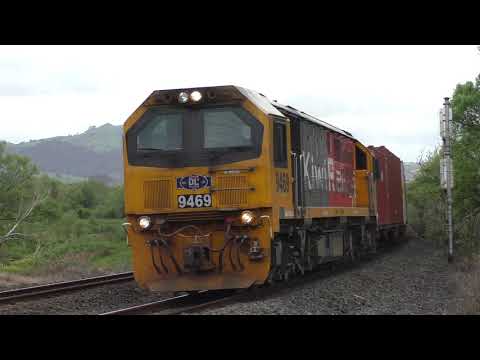 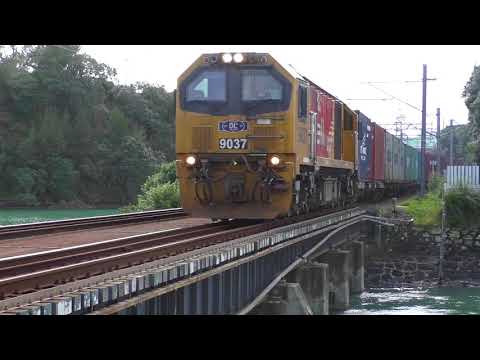 DL 9037 heads the port shunt through Glen Innes and Judges Bay, with a load of wagons bound for the Port and then Wiri. Although it was rare to see a DL on these trains, it has been increasingly common owing to the withdrawal of the DBR class and the limited availability of the DC class 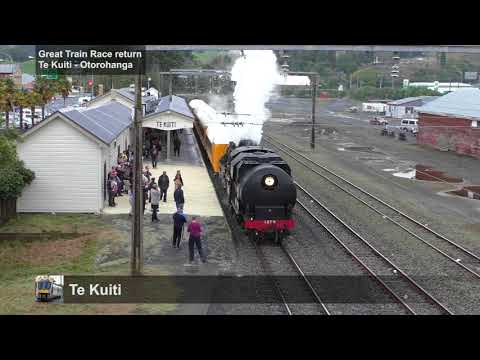 Otorohanga hosted the Steamfest festival in August 2017, celebrating the golden era of steam and vintage machinery. The star of the show was Mainline Steam's newly named Ja 1275, running a number of short excursions between Otorohanga, Te Kuiti and Te Awamutu, as well as a dinner train to Hamilton. Here, Ja 1275 races a convoy of Model T Ford cars to Te Kuiti, named the Great Train Race. After returning to Otorohanga, it heads for Te Awamutu on the Kiwiana Capital Connection 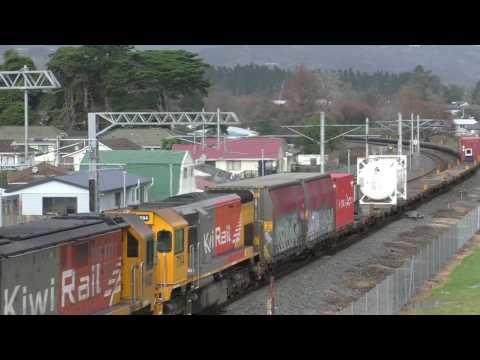 DL 9400 and DFT 7104 lead train 228 through Papakura, in a gap between periods of rain. DFT 7104 was the only member of its class (alongside three DFBs) to be leased to Auckland Transport for their SA carriage trains, until electrification 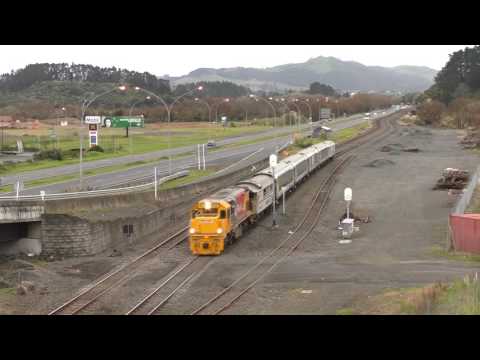 Two freshly overhauled DFBs, DFB 7322 and DFB 7023, visited Auckland on trains 201 and 228. Both locomotives were in storage for a period of time before going in for overhaul and DFB conversion 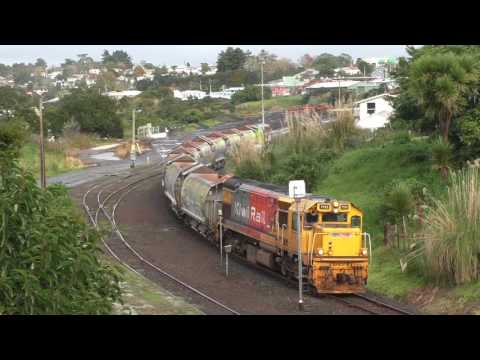 DFB 7173 leads WT10 north through Kaipara Flats, Wellsford and Topuni. The work train originated at Westfield and travelled to Whangarei, dropping ballast along the way 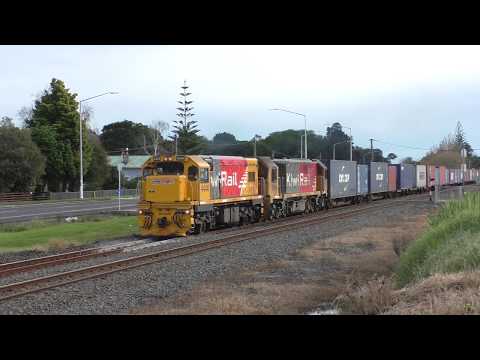 DC 4444 leads DL 9014 on train MP5 through Paerata (wrong line running) and Buckland. DC 4444 was undergoing testing as part of allowing the DC class to lead trains again. The DC was taken off the train at Waharoa and headed back on MP6 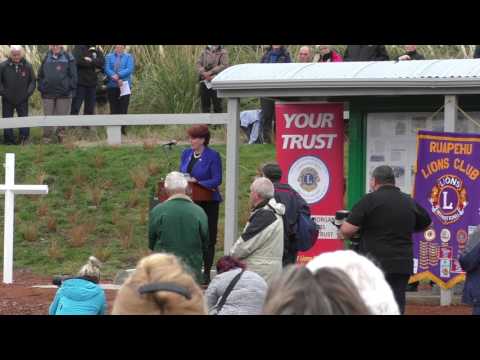 On 7 May 2017, a memorial service was held at Tangiwai to honour the efforts of driver Charles Parker and fireman Lance Redman in their efforts to save 134 lives during the Tangiwai disaster in 1953. Shown here is footage of Ja 1275's photo run near Te Kuiti on its run south, as well as excerpts of speeches from Hon. Maggie Barry, Ian McKelvie and Rob McAlpine 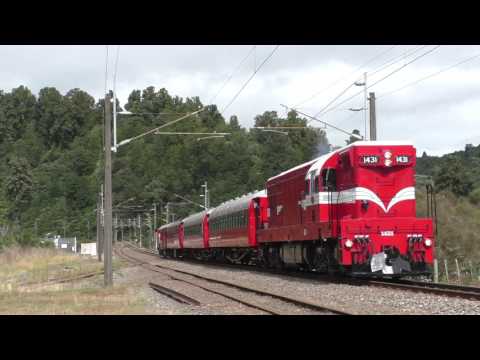 DA 1431 hauls the NIMT Scenic Delight excursion from Paekakariki to Glenbrook, run by Steam Inc. The consist was bring positioned for a Christchurch Press charter later in the week. Trains 240 and 200 both overtake DA 1431, at Marton and Taihape respectively 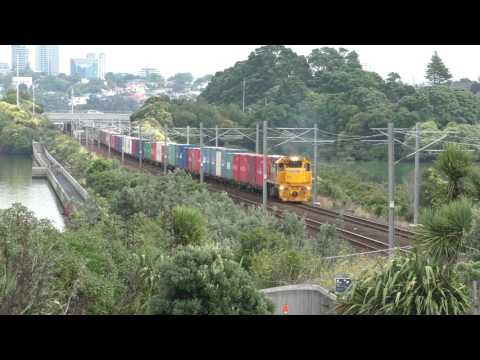 After being repainted in April 2016 from MAXX into KiwiRail livery, DC 4444 finally returns to Auckland. Here, it leads trains 166 and 197 from Wiri to Auckland Port and then to Westfield 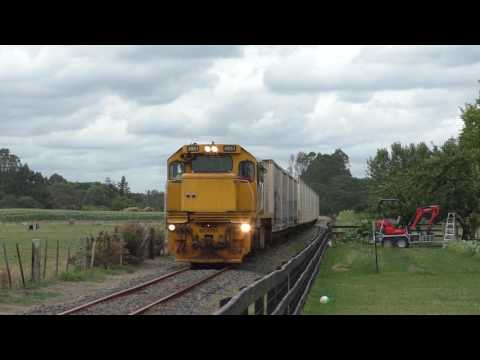 Former MAXX locomotive DC 4951 shunts the dairy factories at Hautapu and Waitoa, seen here both light and with wagons. The shunt brings wagons from the factories, as well as Morrinsville, to Te Rapa. The line to Hautapu is the remains of the former branch line to Cambridge, while the line to Waitoa is a stub left over from the old ECMT, later the Thames Branch 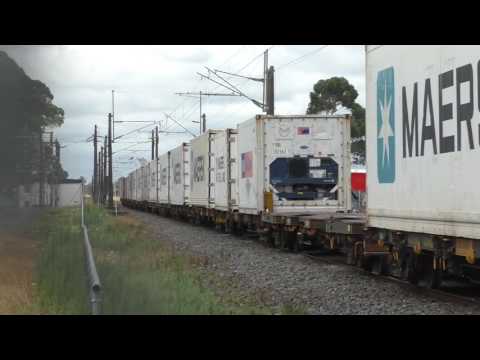 Train 390 (Palmerston North - Tauranga) pulls into Te Rapa yard to change from EF class locomotives to diesel locomotives for the run to Tauranga. EF 30059 and EF 30226 lead the train into Hamilton on the NIMT, then DL 9072 brings the train (now running the opposite way) through Eureka on the ECMT. Recently, KiwiRail announced that the EF class will be withdrawn within 3 years, bringing an end to electrification on the NIMT. The DL class will be their likely replacement 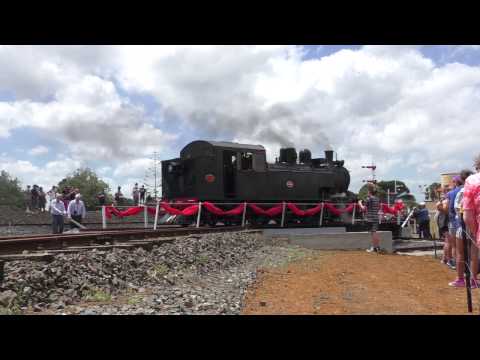 On its final weekend before leaving service for an eventual overhaul, Ja 1250 is seen hauling the regular day's services at the Glenbrook Vintage Railway on 29 January 2017. On the same day, it and Ww 644 attended the opening ceremonies for the new turntable at Glenbrook station, with Ww 644 officially becoming the first locomotive to be turned 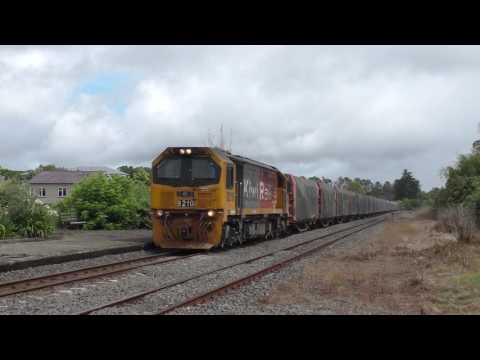 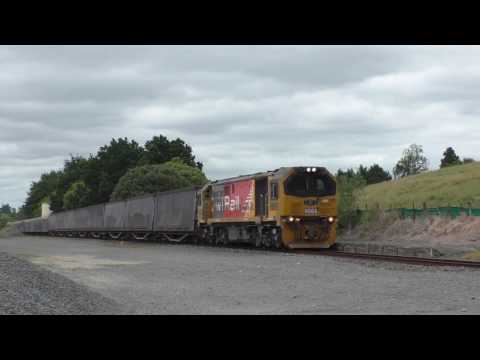 DL 9066 leads train 483 through Tirau, on Christmas Day Observed (Tuesday 27 December 2016). The loaded train is heading for Mt Maunganui, and is one of several trains still running over the holiday period 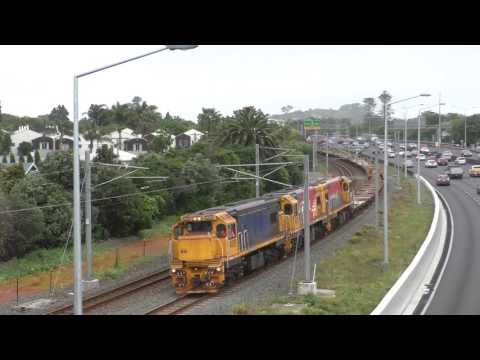 DC 4939, DC 4571 and DC 4260 bring the port shunt over the hill and down into Ellerslie, with a completely empty rake of wagons. The shunts were sent via Newmarket during the weekend of 19/20 November 2016 due to work on the NIMT north of Otahuhu, and an extra DC was added to cope with the grades (with a loaded train) 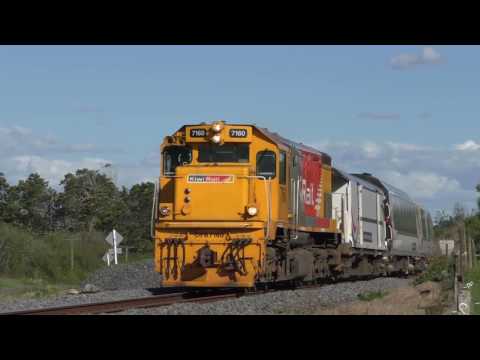 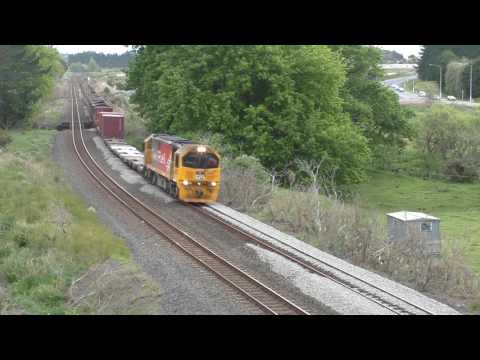 DFB 7200 leads train 200 wrong line out of Paerata, half an hour before the Block of Line on the Up Main expired. The BOL expiry released a queue of three trains that were waiting at Papakura and Pukekohe (trains MP9, 334S and 235) that were held up by train 200 running wrong line in the section. The three freight trains passed through Drury in the space of 8 minutes 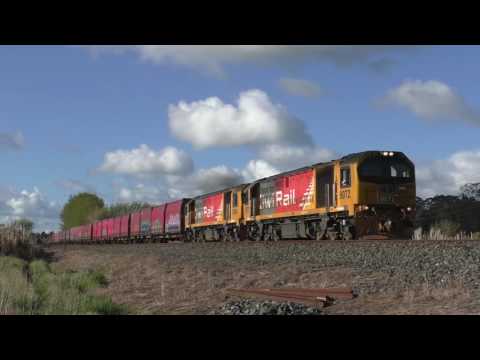 With Silver Fern railcar RM 30 tacked on the back, DL 9072 and DL 9204 lead train 243 across Sutton Road at Drury, heading south towards Wellington. The train serves as the weekend overnight service, departing Saturday evening and arriving in Wellington on Sunday morning

All photos and videos on this site are licensed under a Creative Commons Attribution-NonCommercial-NoDerivatives 4.0 International License.
Attribution to https://nzrailphotos.co.nz is required. If you wish to use photos for commercial use or for an exception to this licence, please seek permission first. Fees may apply.
Previous 1234...21 Next